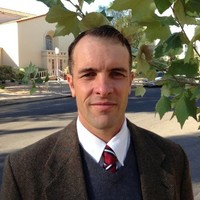 Paul Schwennesen is a southern Arizona rancher, director of the Agrarian Freedom Project, and 2020 PERC Lone Mountain Fellow. Paul is also a Ph.D. candidate in 16th-century history at the University of Kansas, Lawrence.

Paul studied history and science at the United States Air Force Academy where he graduated with distinction as the John R. Rupp scholar in interdisciplinary studies and gained his first formal introduction to classical liberal thought. He served six years as an Air Force Officer including a combat-zone deployment to Afghanistan and was named Company Grade Officer of the Year shortly before separating as a Captain in order to pursue private business. Paul has a Master’s degree in Government from Harvard University where he did his thesis under the direction of Harvey Mansfield.

In addition to building a successful beef business in southern Arizona, Paul has been engaged in a number of free-market approaches to environmental stewardship and earned the Environmental Sustainability award from the University of Kansas. He is a semi-regular contributor to PERC, and his writing has appeared in The New York Times, American Spectator, Stockman Grass Farmer, Law and Liberty, and in a textbook on environmental ethics published by Oxford University Press.

Paul’s current research interests relate to the environmental history of the 16th-century Spanish “Entrada” into the frontiers of New Spain. He is analyzing both the landscape and ethnohistorical impacts of Coronado-era domestic livestock introduction into the semi-arid regions of northern Mexico and the modern-day U.S. Southwest. Most importantly, Paul is the father of three delightful children who are—without irony—raised in a decidedly centralized, top-down environment. The Power of Prices

The command-and-control viewpoint isn’t illogical. The American food supply is one of the safest in the world. But I submit that the current system fails to tap creative, market-based incentives to further improve food safety.

Agriculture as a stable, prosperous way of life is practically extinct. It doesn’t need to be. We have the power within our consuming choices to…

Scourge: IIlegal Aliens in our Midst

This may be no surprise to the rest of you, but down here in border country, we are surrounded by immigrants. Aliens at every turn.…

Scourge: Illegal Aliens in our Midst

Federal and local government spending on invasive flora and fauna amounts to almost $3 billion annually. That’s over three times the $830 million in actual…