This year, the National Park Service will celebrate its 100-year anniversary. But not all is well in our national parks. The agency will enter its second century with an $11.9 billion backlog in deferred maintenance projects, an amount five times higher than its average annual appropriations from Congress.

In this PERC Public Lands Report, we explore several creative ideas to address the deferred maintenance backlog in our national parks. These proposals are intended to expand the range of options for policymakers and park managers to consider as the nation turns its attention towards national parks in 2016. In particular, these reforms would enable parks to become more self-sufficient and less reliant on Congress for annual appropriations.

On August 25, 2016, the National Park Service will celebrate its 100-year anniversary. But as the agency enters its second century, our national parks are in trouble. Decades of neglect and misplaced priorities have left a glaring blemish on a system known for its crown jewels such as Yellowstone and Yosemite. The Park Service will reach its centennial with an $11.9 billion backlog in deferred maintenance projects, an amount five times higher than the agency’s latest budget from Congress.

The deferred maintenance backlog refers to the total cost of all maintenance projects that were not completed on schedule and therefore have been put off or delayed. The effects of the backlog show up throughout the National Park System in the form of dilapidated visitor centers, deteriorating wastewater systems, and crumbling roads, bridges, and trails. Nearly half of all roadways in national parks are rated in “fair” or “poor condition.” Dozens of bridges are considered “structurally deficient” and in need of rehabilitation or reconstruction. And 6,700 miles of trails, more than one-third of all trails in the entire park system, are in “poor” or “seriously deficient” condition.

In some cases, the deferred maintenance backlog threatens the very resources the National Park Service was created to protect. According to the agency’s 2017 budget justification, a leaky wastewater system in Yosemite National Park has caused raw sewage to spill into the park’s streams. In Grand Canyon National Park, an 83-year-old water distribution system frequently breaks, leading to water shortages and facility closures. And at Apostle Islands National Lakeshore, a deteriorating visitor center is contaminated by mold and rodent infestations, resulting in unsafe conditions and temporary closures. 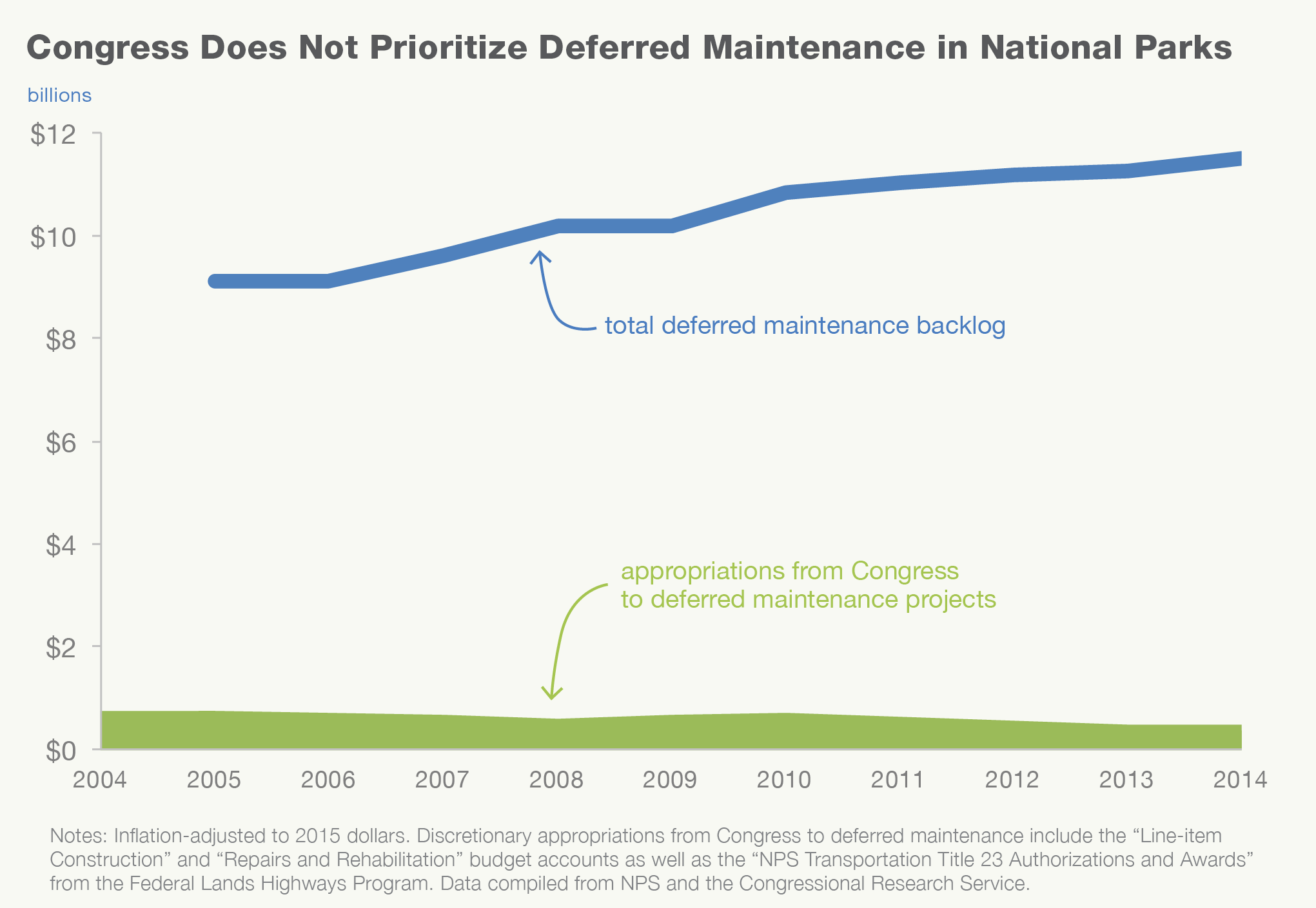 The basic problem is one of incentives. The National Park Service relies on appropriations from Congress for the vast majority of its funding. But Congress would rather create new parks or acquire more land than fund mundane maintenance projects. As one former congressman put it, “It’s not very sexy to fix a sewer system or maintain a trail. You don’t get headlines for that.” Since 2000, 26 new park units have been added to the National Park System, yet discretionary appropriations from Congress remain essentially flat.

Simply put, relying on congressional appropriations is not a practical solution to fix the backlog problem in national parks. In fact, an over-reliance on Congress is likely to make the problem worse. Thanks to Congress’ neglect, the deferred maintenance backlog has increased by more than 25 percent over the last decade. With more parks but little or no additional funding, our national parks are stretched thin. Unless changes are made, the National Park Service estimates the backlog will continue to increase as new parks are created and existing facilities continue to deteriorate.

Background on the Backlog

At $11.9 billion, the National Park Service maintenance backlog has the potential to overwhelm the agency during its second century. When maintenance is not completed on schedule, it accelerates the rates at which facilities deteriorate. This diminishes the value of park assets and increases repair costs, often as much as three to five times more than if the resources were maintained properly.

In recent years, several attempts have been made to address the backlog. The National Park Service has repeatedly requested additional funding for deferred maintenance projects, but the amounts appropriated by Congress have been small. A special Centennial Challenge fund, established by Congress in 2008 to support park improvements, has received less than $55 million in appropriations to date. Recent proposals to increase appropriations to the fund have so far been unsuccessful. The proposed National Park Service Centennial Act would separately allocate $900 million over a three-year period “to correct deficiencies in National Park Service infrastructure and facilities,” but the act has yet to receive widespread support in Congress.

As the National Park Service celebrates its centennial this year, it is clear that the current approach to addressing the backlog is not working. This report explores several creative ideas to address the deferred maintenance backlog in our national parks. The ideas are intended to expand the range of options for policymakers and park managers to consider as the nation turns its attention toward national parks in 2016. Among other things, these reforms would enable parks to become more self-sufficient, and therefore less reliant on Congress for annual appropriations.

None of these ideas alone will solve the backlog problem. But together they offer a range of options to tackle the problem and prepare our national parks to address one of the major challenges of its second century: breaking the backlog.