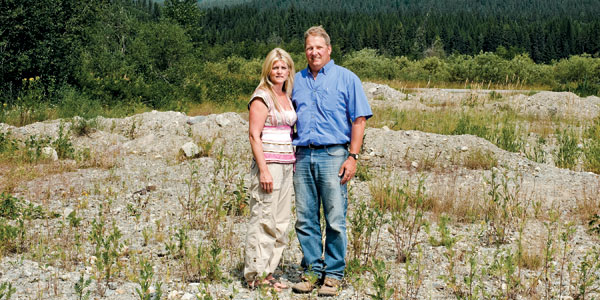 Mike and Chantell Sackett were stuck. Complying with EPA demands meant paying to throw away their property. If they ignored the EPA they would be liable for massive fines that would obviously bankrupt them and they could be subject to criminal liability.

The Sacketts bought a lot near Priest Lake in northern Idaho in 2005 for $23,000. They planned to build a home on the site pictured above in an area with many houses already. Homes and a road existed between their lot and the lake, which is 500 feet away. They rounded up needed permits and began work in the subdivision.

The EPA uncovered this assault on a bit of dirt and in 2007 declared their lot was a wetland. The Sacketts were ordered to cease construction on the half-acre parcel. EPA told them the area was a wetland that could not be changed without its permission. It ordered them to remove the gravel that had been dumped on the lot (at a cost of $27,000), to restore the vegetation to what existed previously, to fence off the property, and to file annual reports about the condition of the property. The Sacketts were threatened with fines up to $32,500 per day until they were in compliance and ceased the wanton environmental destruction. (EPA also claims the right to double the fine to $75,000 per day when it prevails—and it declared that it had prevailed because it said it had prevailed.)

The Sacketts sued, seeking a declaration that the property was not a wetland. It is not on the lakeshore and has no creek running through it. It gets wet only when it rains. The federal district court and Ninth Circuit Court of Appeals held that the Sacketts could not go to court until the EPA requested a federal court to enforce their order. The courts held that courts could not review compliance orders of the EPA and that there was no violation of the Sacketts’ due process rights.

The Pacific Legal Foundation took the case to the Supreme Court for them, arguing that they had the right to have the matter heard in federal court. Reversing another decision from the Ninth Circuit, the Court held unanimously for the Sacketts. The Court did not address the wetland issue. The point of the case is one of administrative procedure.

The Court held that the Sacketts had the right to contest the EPA order as “arbitrary” and “capricious” under the Administrative Procedure Act. The EPA deprived them of their due process right. Since the EPA order was a “final agency action” the Sacketts had the right to go to court to challenge the agency. There was no other remedy. Courts can review the actions of agencies under the Administrative Procedure Act to ensure that its requirements have been followed properly by the agency. The agency cannot simply declare victory, impose fines, and the party subject to the ruling have no chance to appeal to the courts.

While the Sacketts gained satisfaction and a bit of fame from a Supreme Court win, don’t bet they ever get to build their house. Unless EPA rolls over, the Sacketts have merely won an administrative point. It may be back to the same agency and courts that spit on them before.

Some years ago beachfront property owners in California and South Carolina won noteworthy victories against state agencies that basically took their property via the regulatory process. The agencies were not pleased that mere citizens embarrassed them before the high court and then drug the parties through the administrative mud for years after the high court decisions. The final results were not the “victories” for the abused citizens that we tend to presume. Agencies have the taxpayer purse to finance their proceedings and more litigation. Homeowners such as the Sacketts have pockets a bit less deep.

As Justice Alito noted in this case [PDF], “real relief” must come from Congress. The Clean Water Act does not contain clear rules regarding procedure. No one really knows what is a wetland. The EPA takes advantage of the lack of clarity and, like any bureaucracy, grabs power. This is the 40th anniversary of the Clean Water Act. As Congress has not seen fit to clean it up over the decades, it is unlikely to do so now.