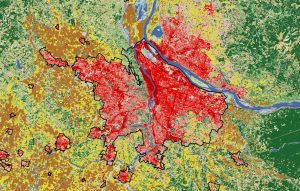 Urban sprawl is a phenomenon that many people love to hate. Surprisingly, there is little systematic evidence on how much sprawl there is or what causes it. Recent research by Burchfield et al. (2006) goes far in illuminating both of these issues.

The authors base their definition of urban sprawl on the average proportion of land that is undeveloped within a kilometer of each building in a metropolitan area. More open space means more sprawl. Using high-altitude photographs spanning 1976 to 1992, the authors demonstrate that although commercial sprawl increased a bit over this period (primarily due to businesses joining consumers in the suburbs), there was no increase in the degree of residential sprawl—the proportion of undeveloped land around residences. (The study stops in 1992 because it takes a long time to convert high-altitude photographs into usable information on economic development.

To be sure, population in America grew over this period. Thus 1.9 percent of the country’s contiguous land area was developed or paved by 1992, up from 1.3 percent in 1976. But the added residential development did not yield any in-crease in urban sprawl: On balance, new residential development has been just as compact as existing development. New development on the urban fringe does tend to increase sprawl, something that is obvious to all of us who see it. But this development is accompanied by “backfilling,” i.e., building on vacant land closer to the core of the metropolitan area, which has an offsetting effect. This second effect (which many of us don’t notice) has turned out to counterbalance the first force. Thus, as population has grown, cities have gotten larger, but they are not any less compact.

This national pattern is accompanied by widely differing sprawl patterns across metropolitan areas. Atlanta and Pittsburgh, for example, are about three times as sprawling as Miami, where only 20 percent of the land within the metro area is not either paved or occupied by buildings. Meanwhile, sprawl in Boston and Los Angeles increased between 1976 and 1992, but it decreased in Atlanta and Phoenix over this period. Thus, the authors go on to ask, what determines the amount of sprawl in a city? The answers are not always what you might expect.

Perhaps most surprisingly, the authors find that there is less new sprawl in cities that are growing rapidly. In such locales, inhabitants seem to realize that any space left open today will be met with demands to build on it tomorrow. Hence, neither private developers nor public officials want to leave much open space behind as development proceeds outward. Steady growth (whatever its speed) also reduces sprawl. In contrast, when growth in a city is erratic over time, speculative demand keeps parcels of land vacant within developed areas. Owners recognize that rapid future growth might yield a sharp jump in the developed value of such land.

Cities that developed large cores (and thus public transit systems) before the automobile tend to have less sprawl today. Nevertheless, the authors find that building new roads around the urban fringe does not increase sprawl. Instead, new development that comes in response to those roads mimics the existing density of the adjacent city. Climate, on the other hand, plays a key role in creating sprawl. Cities with warm winters and cool summers tend to sprawl, because all that nice weather increases the demand for open space.

When there is a sharp difference in the extent of zoning regulations between a city and its urban fringe the result is more sprawl. Nationwide, “leapfrogging” of development (defined as development more than a kilometer from existing development) is rare. But it does tend to occur where developers find that they can avoid strict zoning rules by building in outlying areas that have little or no regulation. One implication is that increases in impact fees on new development in a city may actually make urban sprawl worse, as development leaps outward to avoid the fees.

One of the major public policy developments of the period covered by this study was increased transfers of money from the federal and state governments to local governments. The authors find that cities that received more of such funding—often used to subsidize public transit or build sewers or other infrastructure—experienced the most sprawl. Essentially, intergovernmental transfers subsidize sprawling development on the urban fringe. Local taxpayers who otherwise would have to help pay for the infrastructure underlying such development no longer must do so when taxpayers elsewhere foot the bill. Hence, local voters are less inclined to object to such development. The result is more sprawl.

Given the long lead times in preparing the data needed to study urban development, it will be some years before we know whether the compact development observed from 1976 to 1992 has continued. Nevertheless, this study’s robust findings on the causes of sprawl are likely to apply to more recent development, whatever its character. And the lessons for now and the future are clear: New roads and rapid population growth are not the cause of urban sprawl, and impact fees and mass transit subsidies will not stop it. Indeed, if the future looks anything like the past, perhaps urban sprawl is something we should simply stop worrying about.

Burchfield, Marcy, Henry G. Overman, Diego Puga, and Matthew A. Turner. 2006. Cause of Sprawl: A Portrait from Space. Quarterly Journal of Economics (May): 587–633.