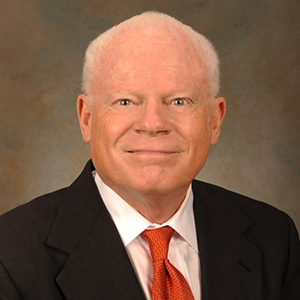 Bobby McCormick’s earliest memories as a child are being raised in a property rights-oriented household by an outdoorsy, farming, lumber/logging family; he remembers always thinking about “who owns what.” McCormick views the environment as an asset and environmental failures as the result of ambiguous environmental ownership. To redress these failures, McCormick thinks that ownership assets need to be clearly marked and defined. He says that “good fences make good neighbors” is both good poetry and good policy.

In 1997, McCormick received the award for Innovative Teacher of the Year, nominated by the students at Clemson University. The following year he received the Alumni Master Teacher of the Year from Clemson University. McCormick has also been a Professor Visitante at the Universidad Francisco Marroquin in Guatemala City, Guatemala in 1990. He is a fellow at Consortium International MBA, CIMBA, which is an Italian program for MBA students, and he lectures annually during the spring in Italy to these students. Currently, McCormick is an economics professor at Clemson and the BB&T scholar in the John E. Walker Department of Economics. He is also senior research associate in the Arthur M. Spiro Center for Entrepreneurial Leadership.

Since 2002, McCormick has been a senior fellow and directed a program at PERC for environmental entrepreneurs who want to have a better understanding of how business and economic principles can be applied to environmental problems. In 2001, he was a Julian Simon Fellow at PERC. He is heavily engaged in the research of carbon sequestration and its impact on global warming. In this research, McCormick is investigating how income affects carbon sequestration as a solution for global warming.

McCormick resides in Clemson with his family. He has two sons, both of whom are heavily involved in athletics. McCormick enjoys spending his free time woodworking, hunting, and roaming his property on his tractor. He spends summers in Bozeman, where he is involved in remodeling a house from the 1880s.

Some Taxes are Good, But the Good Die Young

How a great tax became a good one and then became, along the way, just another tax.

The Prius Premium and Other Sensible Nonsense

Photo: Toyota As this working paper by Steven and Alison Sexton explains, there is a substantial, and important, price premium that Toyota Prius buyers are… Wolves, Mosques, and Other Environmental Problems

Most environmental issues involve resource conflicts. One person wants to use a river to carry away her waste products, while another one wants to swim…

What do these four symbols have in common? Well, to start with they all cost resources, that is, they are not free. Why in the…